Pencildrawing and text by RvM

Photo published in the Dutch magazine De Prins dated 23 February 1918 when she was destined to leave the Nieuwediep, Den Helder towards the Dutch East Indies.(1) 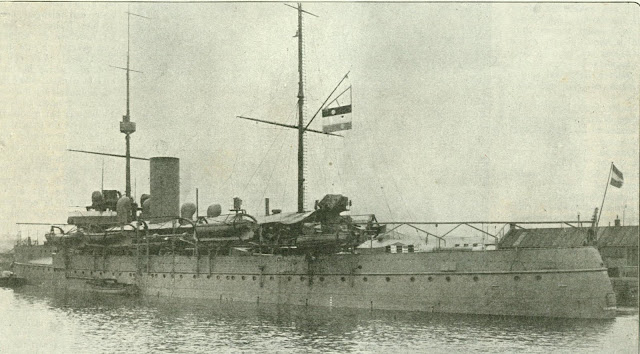 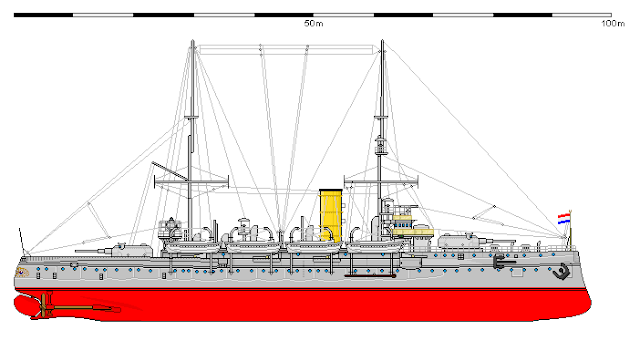 After the rebuilding in 1926 was she commissioned 2 May 1927 but in the summer a year later was she fitted out with a crane for two-four floating planes. 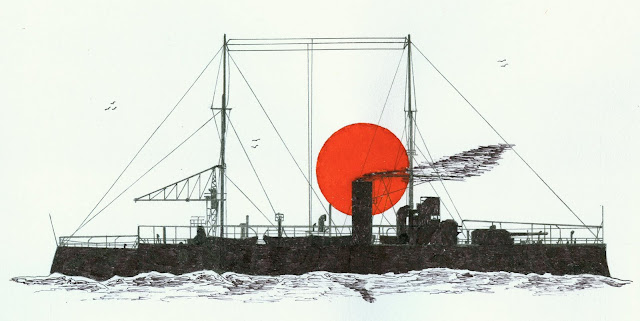 After 1935 the crane was removed. In the Spanish Civil War used for escort duties. In 1938 she was decommissioned but at the outbreak of the Second World War again in service as the batteryship Vliereede serving off Texel. Decommissioned 11 November 1939 and  laid up at the navy yard at Den Helder. She was sunk by own personnel May 1940, salvaged by the Germans and rebuild at Antwerp as the floating battery Ariadne.

In May 1945 found back at Wilhelmshafen and rebuilt at the Wilton-Fijenoord yard as an accommodationship. Commissioned 21 October 1947 at Amsterdam as Wachtschip Amsterdam and later at Willemsoord still called Hertog Hendrik (A 888). Decommissioned 27 September 1968 and sold 28 August 1972 to be broken up.

Note
1. See on this weblog also the note “The Dutch auxiliary cruiser Tabanan of the Rotterdamsche Lloyd 1908-1930“. The convoy departed in fact not earlier as 5 July 1918. for the Dutch East Indies.
Geplaatst door ALVAMA op 20:14

ALVAMA
My father (Ron) and I (Alexander) are doing research in the topic navies and trading companies in the period 1500-present. My mother Karin helped my father early 1980's with research and nowadays she is almost daily photographing the ships passing on the river Schelde. My father started his research more as 40 years ago. First he was interested in the Dutch navy and the navies in the Second World War , later in the period 19th century-present and about 20 years he started his research in the topic navies 1500-1860, in fact the era of the sailing warships including the galleys and the trading companies like the Dutch E.I.C. and the W.I.C. My self, I’m interested in the topic navies 1860-present especially Russian built warships and Dutch warships and further more sailing ships over the whole period. Together we are busy with photographing, drawing and doing research in archives, literature and on the web trying to collect every kind of information and sharing that with others without commercial thoughts just because we are ship lovers and fond of naval history.