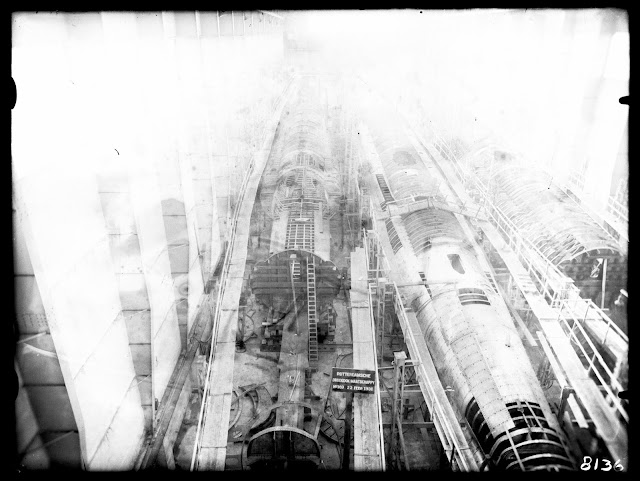 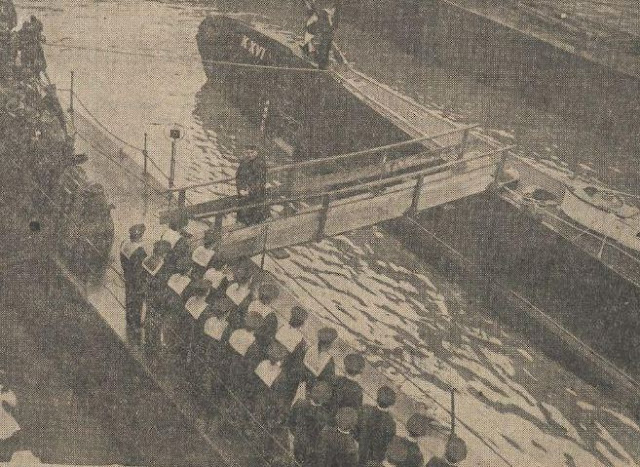 Photo published in the Dutch newspaper Nieuwe Tilburgsche Courant dated 31 January 1934 when she was handed over by the yard to the navy.

The Dutch official website of the department of Defence announced on 23 October 2011 that the wreck of the Dutch submarine Hr.Ms. K XVI which was missing since 1941 was discovered in the waters above the Indonesian island Borneo. In begin October a local fisherman reported a wreck and a team of divers from Singapore and Australia found the wreck. Naval experts identified her as the long missing K VI. She was part of the allied forces which tried to prevent Japan capturing the Dutch East Indies (nowadays Indonesia). She sunk in the night of 24-25 December 1941 the Japanese submarine chaser Sagiri but was the next day torpedoed by the Japanese submarine I-66 in the South Chinese Sea. The wreck is recognized as a war grave and divers are requested to stay away.

She was laid down at the yard of the Rotterdamsche Droogdok Maatschappij at Rotterdam, Netherlands on 31 May 1930 with building number 169, launched on 4 April 1033 and on 30 January 1934 a year later commissioned. On 7 January of the next year she departed towards the Dutch East Indies. In the Nieuwe Tilburgsche Courant dated 8 January 1935 was a photo published of her departure together with the K XVII. 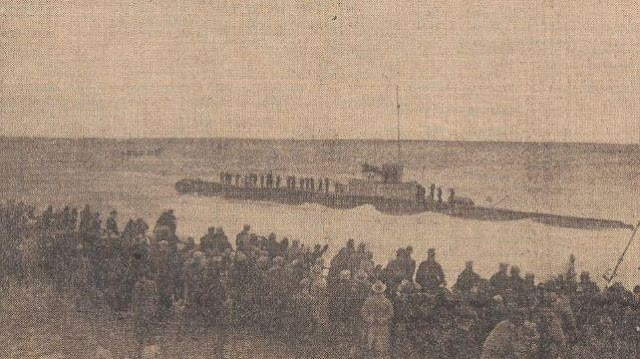 The same newspaper dated 4 February published a photo of the audience by 35 crewmembers at the Vatican by the pope. The location is the San Damaso square. 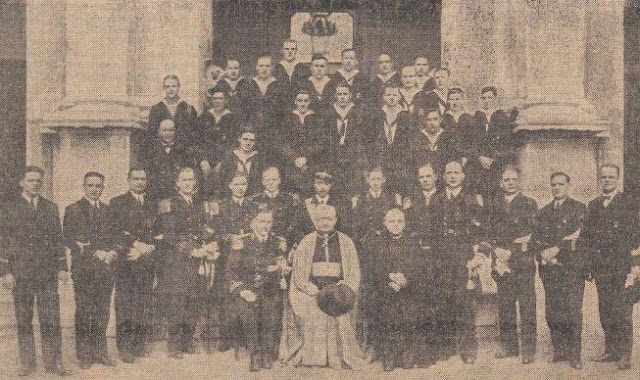 Another Dutch newspaper Het Vaderland evening edition dated 30 January reported that she was that morning commissioned after the official transfer to colonel Vos representing the minister of Defence and handing over the command to lieutenant Waning. The morning edition of this newspaper wrote the next day that her commanding officer held a speech. The transfer was symbolic he said and every men on board should know that she was part of the Royal Netherlands Navy and so they were not just serving on board of her but also part of the navy. She was a link of a chain which numbered just a small number of links. So this small number had to be compensate with quality. She was a excellent ship comparable to the best submarines of other navies. The KXVI was the last of the ordered 3 submarines to be build by the yard and colonel Vos congratulated the yard with her well accomplishment.

Her dimensions were 73,80 x 6,51 x 3,80 metres with a displacement of 765 tons surfaced-1,020 tons submerged. She was fitted out with 2x8 cylinder MAN Diesel engines and 2 electro engines supplying 1,600 ahp while surfaced and 1,000 ahp while submerged and while driving 2 screws allowing a speed of 17 knots while surfaced and 9 knots while submerged. Her crew numbered 37 men. The armament consisted of 8-53,3cm torpedo tubes, 1-8,8cm guns and 2-4cm machine guns.
Geplaatst door ALVAMA op 15:56

ALVAMA
My father (Ron) and I (Alexander) are doing research in the topic navies and trading companies in the period 1500-present. My mother Karin helped my father early 1980's with research and nowadays she is almost daily photographing the ships passing on the river Schelde. My father started his research more as 45 years ago. Nowadays he is particularly interested in whaling, tugs and navies.. My self, I’m interested in the topic navies 1860-present especially Russian built warships and Dutch warships and further more sailing ships covering the whole period. Together we are busy with photographing, drawing and doing research in archives, literature and on the web trying to collect every kind of information and sharing that with others without commercial thoughts just because we are ship lovers and fond of naval history.