Local newspapers can supply a lot of interesting details dealing with merchant trade shipping and building. Details which for instance no longer can find in another way due to the fact the archives of the shipping companies and yards are missing, incomplete or not for (historical) research accessible. The main newspaper I used for this note is the Schiedamsche Courant. 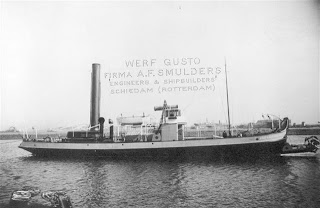 The beautiful photographs are published with courtesy of the South Australian Maritime Museum for which I’m very grateful. Saturday, 18 March 1911. Yesterday was with success the steel hull of a sea going cutter-suction dredger with press equipment launched built for the government of South Australia. Main dimensions were 42 x 9 x 3,50 meter (hold). The main engine for driving the sand pump, dredging and the screw while sailing was of the triple expansion type and delivered more as 725 ihp. To drive the cutter head of the suction pipe, the winches, the independent condenser and supply electric light were smaller steam engines available. There were two steam boilers each with a heating surface of 120 square meter and 13 atmosphere pressure. The dredger was build under supervision of Lloyds and was able to work on a suction depth of 13 meter resulting in around 1.500 ton each hour while dredging in firm clay. The ground was press away over a distance of 1.500 feet at a height of 20 feet above the waterline. Her speed was 9 knots. Was destined to depart to Australia under own steam. The details of this news item are similar to an item in the newspaper Rotterdamsch Nieuwsblad dated 14 June 1911.

Wednesday, 28 June 1911. The sea worthy hopper South Australian which departed the 13th the yard Gusto towards Adelaide arrived yesterday without problems at Algiers. 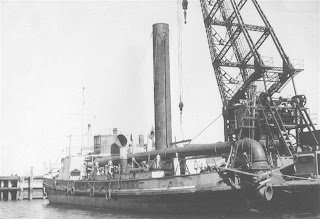 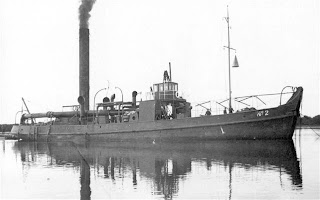 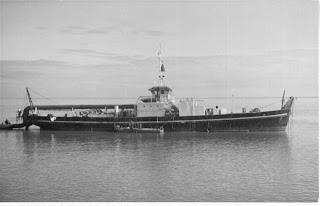 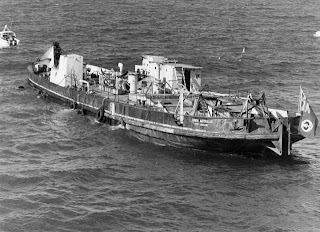 The newspaper Het nieuws van den dag: kleine courant dated 15 June 1911. Schiedam, 13 June. The seaworthy clay hopper dredger South Australian departed under own steam power towards Australia. Her dimensions are 42 x 9 x 3,50meter. According to the contract her capacity had to be 1.300 tons each hour while working in clay ground. During the official trail she managed to suck 1.550 tons clay and in sand ground even 2.600 tons. 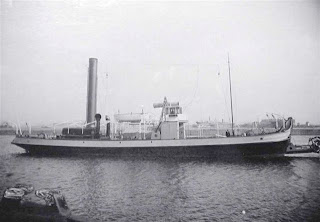 The website http://www.environment.sa.gov.au/heritage/ships_graveyards gives more information about her final fate. According to this website she arrived early 1912 at Port Adelaide where she was used for the dredging of the South Australian Company’s wharf. The spoil was sideways discharged in barges later through a floating pipeline and now the spoil was used for creating new land. Although mainly serving in Port Adelaide and the Outer Harbour she was involved between 1958-1961 in dredging of the Port Pirie Swinging Basin and in 1971 rebuilt at the Marine and Harbors dockyard at Glanville where for instance the original steam engines were replaced by four diesel engines. In 1982 she needed extensive repairs but was instead laid up, two years later stripped of every thing of value, handed over to the Department of Fisheries and sunk 16 January 1985 off the Glenelg coast to serve further as an artificial reef where she nowadays still exist.
Geplaatst door ALVAMA op 18:52

ALVAMA
My father (Ron) and I (Alexander) are doing research in the topic navies and trading companies in the period 1500-present. My mother Karin helped my father early 1980's with research and nowadays she is almost daily photographing the ships passing on the river Schelde. My father started his research more as 45 years ago. First he was interested in the Dutch navy and the navies in the Second World War , later in the period 19th century-present and about 20 years he started his research in the topic navies 1500-1860, in fact the era of the sailing warships including the galleys and the trading companies like the Dutch E.I.C. and the W.I.C. My self, I’m interested in the topic navies 1860-present especially Russian built warships and Dutch warships and further more sailing ships over the whole period. Together we are busy with photographing, drawing and doing research in archives, literature and on the web trying to collect every kind of information and sharing that with others without commercial thoughts just because we are ship lovers and fond of naval history.